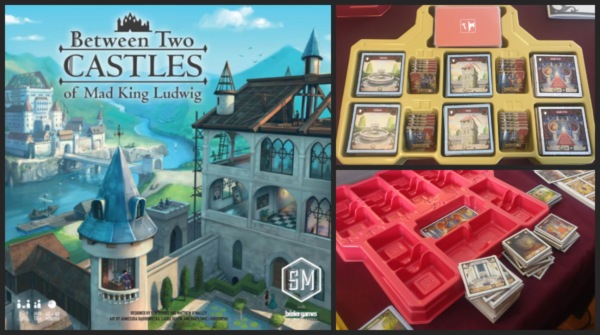 Between Two Castles of Mad King Ludwig is one of those games that does exactly what it sets out to do. Taking two independently successful board games and mashing them together doesn’t seem like the easiest task, but in both feel and gameplay Between Two Castles captures its predecessors. Players take turns picking and placing tiles into each of two castles, built in collaboration with their neighbors. Rooms provide certain inherent bonuses, as well as potential synergies with adjacent rooms. At the end of two rounds of drafting, players score points equal to the lesser of their two castles. It’s a fun, fast, thematic game that plays up to seven. Give the newest episode a listen for our full thoughts!

Lesley and Hunter also share the TONS of games they’ve been playing lately. Legacy games are the order of the day, with Betrayal, Aeon’s End, and Charterstone all rating a mention. We also discuss the legacy-ish Shadows of Brimstone, as well as Ancient World and the super awesome looking U-Boot.

Don’t forget to visit washingcon.com to grab your tickets for WashingCon 2019! Tickets are still available for the discounted price of $50 for an adult weekend pass or $20 for a child. Those prices will go up at the end of June, so don’t hesitate!