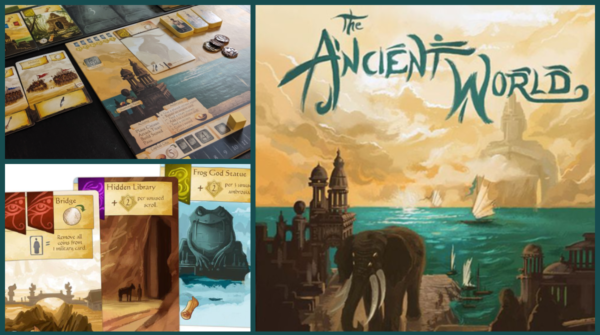 It’s been a minute since we’ve reviewed a Red Raven game, but the drought is over! Ancient World is the latest worker-placement, resource-managey goodness, and it plays 2-4. Players compete to collect banners which will earn them points at the end of the game. Banners can be found on Empire Cards which can be built, or on Titans which can be defeated by your armies. There’s an intereseting parallel gameplay, as the armies are mostly separate from your citizens. You can hear more about it, as well as our official ratings, in the episode so give it a listen!

As usual, we talk about What We’ve Been Playing, including some more Betrayal legacy for Lesley and Hunter, and a nifty little game called Planet for Jakub.

As we mentioned last week, we’ll be heading to Origins June 12-16! If you’re going to be there, hit us up. We’d love to hang out, and we’ll probably have t-shirts! And for something a little closer to home, don’t forget to buy your tickets to WashingCon, happening September 7-8. Tickets are still discounted, so get ’em now!